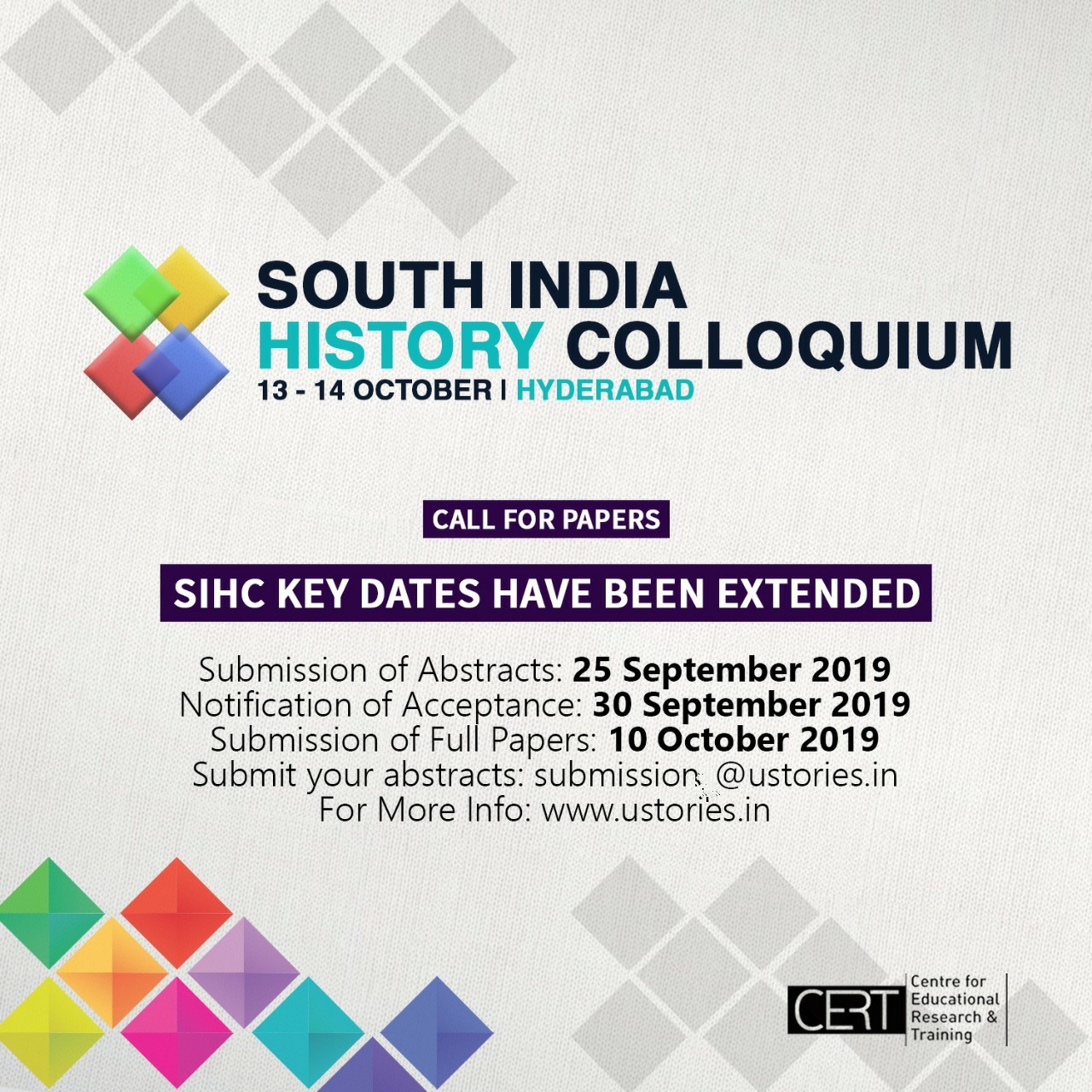 In order to facilitate a platform for rigorous academic as well as popular endeavours on regional historiography in India, the Centre for Educational Research and Training [CERT] is organizing various Regional History Colloquia and History-related public programs with the tagline, ‘Remembering Histories, Asserting Identities’. As part of this series on Histories, the South India History Colloquium will be held on 13-14 October 2019 at Hyderabad, Telangana State.

History is an ever-evolving field of study, which undergoes various dynamic experiments and explorations time and again. Much didactic efforts have been made to comprehend the historical studies of vast geo-political areas throughout the ages. However, the ever-changing nature of territorial borders and demarcations affect the historiography of each area, while restructuring it with the interests of the people in power. Fixing of boundaries is a complex task in itself, as man-made boundaries change frequently and rapidly with political change. The only stable boundaries are geographical and even these are liable to be substantially modified by ecological changes. In such a situation, the most viable method to study the history of a particular people would be taking up the region as category of reference. The definition of a region requires the correlation of many facets in the study of historical evolution.

According to PL Scholtz, regional history studies the past from a local angle, is interested in the smaller community and the activities of ordinary people in their own environment. After all, true history is the story of change that occurs through the interaction of major determining events and the rhythm of the small, prosaic, almost unobtrusive course of daily life. The regional history tries to analyze the diverse manifestations of culture, legacy, language etc., with a deep insight over the perspectives of the subject people. A Wessels acknowledges the broadness of the definition of regional history, but adds that it can also be associated with environmental history, which includes urban history, local or town history and rural history. Frederick J Turner brings forward the significance of regionalism from emphasizing the role of the frontier to another concept titled ‘sectionalism’, which analyzes that the study of separate histories of a particular geopolitical arena is crucial in an understanding of history as a whole. In a similar way of discernment, it can be argued that the complex empirical realities in India must be comprehended better in terms of its constituent parts or regions.

The phrase ‘South India’ is highly contested and controversial in terms of region as well as regional labelling. This term often tries to invisibilize the historical legacy and diverse narratives of the people and lands, in order to reduce its meaning into a territory situated in the southern part of Indian subcontinent. Even though the existing historiography of India always relies upon the whole Indian History as a unit of reference, recognition of region as a referential point makes a rupture in its academic as well as political sense. As historiography is perceived as the reading/writing of the past from the present scenario, it often falls into the trap of justification and legitimization of the contemporary events and issues. At the same time, it would be an imperative for the invisibilized regions and marginalized communities to keep alive their stories of hope and pain throughout the ages.

While the post-colonial nation-state formations often attempted to consolidate a sense of national spirit as an ‘imagined community’ by using both coercion and appeasement, people who wanted to keep the difference and identity raised resistance to assimilation, appropriation and subordination. The various stories of resistance against the violent annexation and disciplinary methods are largely neglected in the texts of official historiography. This normally happens when the linguistic identity and capabilities of communities are submerged into the dominant language culture, which may be largely inaccessible for the majority of the regional communities. Here, the existence of oral and poetic histories in scriptural and non-scriptural languages needs to be recognized and brought to the mainstream historiography. While the motto of the state ‘Unity in Diversity’ repeatedly calls for unification and uniformity of national identity, the dissatisfied voices of regions and people look for diversifying the diversities. This conundrum of unification and diversification stays at the heart of historiography in India, where the valorization of hegemonic powers involved in historical appropriation of religious and cultural symbols and institutions of the past often are normalized.

We generally classify the region of South India (with all the caveats about the inadequacy of that term) into the geographical region south of Narmada river, which today broadly fall under the federal states of Maharashtra, Karnataka, Goa, Andhra Pradesh, Telangana, Kerala and Tamil Nadu. These state-level categories are often used for academic/policy-level relaxation to comprehend complex nature of subject in a broader arena of references. In contrast to this attempt, we would like to encourage researchers to explore beyond these conventional binaries/categories of policy procedures and discover more nuanced histories of people, communities and lands. We welcome such academic endeavors of diversification and decentralization of historiography in order to make it more inclusive and wide open to be accessible for the unhistoricized people.

CERT is delighted to invite institutional as well as independent researchers, preferably students/scholars from the states of Tamil Nadu, Kerala, Karnataka, Goa, Andhra Pradesh, Telangana and Maharashtra, for submission of academic papers related to the conference themes.

Register here to participate in the SIHC as a Delegate: https://forms.gle/JdRuR7uS96hBfv939